As an English teacher, I have experienced the groans and complaints of students when you announce with enthusiasm that the novel they will study for term will be one of the classics such as Pride and Prejudice, The Great Gatsby, Frankenstein, or, even better, the great William Shakespeare himself. Not fair! they cry. They want Rowling over Orwell, Riordan over Melville, Taylor Swift over Keats or Byron. One of the first questions out of their collective mouths when you announce the title of the text is, “Have they made a movie of it?”

I’ve heard all the comments. “It’s boring.” “I don’t understand it.” “Nothing happens for page after page.” “Why doesn’t she just tell the story instead of all this description?” There are many other similar observations. Students today find it hard to see the relevance of these works. They live in a world of immediate satisfaction, of CGI movies, of plot over characterisation, of story over theme or form.

Schools have students study the classics–also termed literary fiction or literature–for a very good reason. They’re hard. Teachers want their students to use their minds, to analyse, to question, to be exposed to great writing, to begin to question the world and seek truth. You have to work at literary fiction. You have to think about it. Your mind must be engaged and functioning on all cylinders in order to appreciate it fully. That’s why it’s taught.

There are basically two types of fiction (a term which includes drama, film, art and music as well, but I’ll stick to novels for the purposes of this essay to make it easier). Literary fiction is more than simple narrative or polemic. It presents complex ideas about life, the universe and everything (thanks Doug!). Its form and content influence each other. It explores critical perspectives, the individual’s relationship to society and emotional manipulation. Most importantly, it is not reducible to any one correct interpretation. Genre fiction is more popular, does not normally explore theme or allow for deep critical analysis. It declares that form and content are separate entities which do not influence each other. It is usually only capable of one interpretation and does not invite resistant readings.

The terms form and content, so important to both of these, require further explanation. Form is exactly that: the form of the work, the structure and style. Genre fiction follows a particular form. The standard romantic comedy has boy meet girl, they hit it off initially, have a falling out, re-unite at the 5/6 point and, after the clearing up of misunderstandings, live happily ever after. A romance author who deviates from this tried and true formula risks readers’ disapproval. Science fiction creates expectations of science-based ideas, aliens and spaceships. Horror is usually expected to explore supernatural themes, and so forth . I know I’m generalising here but it’s to make a point.

The generally accepted structure of genre fiction follows that tried-and-true formula of exposition, conflict, rising action, climax, denoument and resolution. This structure is taught in creative writing classes. It’s spouted as the way to write a story, and woe betide the author who strays from it. The style must follow the style of books of a similar genre.

Literary fiction does not necessarily do any of this. In it, form and content influence each other. Rules are broken for structure and style because the depth of theme, the examination of character, the complication of the story demand that they be free to follow whatever course they need to in order to put across the message. In Moby-Dick  Herman Melville stops the plot and lectures on such esoteric topics as chowder, harpoons, try-pots and the taste of whale meat because that information helps the reader to fully appreciate the word of whaling, so that the last hundred pages, in which the pursuit of the white whale becomes some of the greatest hunting-themed prose ever written, can be appreciated on a deeper, more visceral level, than might otherwise have been possible if the reader plunged in without all this “knowledge of the trade”. Melville even has an entire chapter is which is “proves” that the whale is not a mammal but a fish, simply because this misinformation better serves the story. 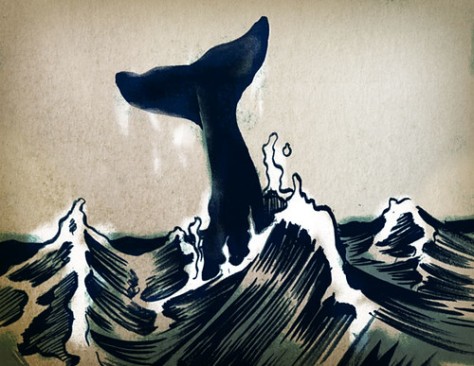 “Yup, whale.” by ScottDonald is licensed under CC BY-NC-ND 2.0

Literary fiction is given to students to study because they have to work at it. The themes–for there can be more than one–must be hunted for. The reader can draw from it their own individual reaction and understanding. Genre fiction is produced for the mass market. It nestles in the safe world of the tried and true. The author is confident that readers will want to read it because they, too, like the comfort of a known structure and style. While the content of genre fiction is infinitely variable, its predictable form carries reassurance.

If you want to write literary fiction, go for it. Experiment. Do your own thing. But be careful: what the reader takes from it might not be what you intended. Your baby is open to multiple interpretations. Critics will see things you never anticipated. You might even be told you’re wrong!

There is a place for both types of fiction. Make sure you know which type you’re reading or writing. And enjoy both. That’s what good writing  and reading is all about.