The Cassini spacecraft has taken a picture of Earth and its moon from out near Saturn. It is an evocative one (see above). Taken on 19 July 2013, the picture isn’t the first of its kind. We’ve had the famous  Pale Blue Dot picture taken by Voyager in 1990. And the Cassini picture will be added to with other things eventually. Photo time is precious out near Saturn, and there is much work for the spacecraft to do. But this is what we have so far. Earth is the bright shiny bit in the middle; the smaller dot is the Moon. (Picture courtesy of NASA).

It stirs my blood that this picture captures every single one of the 7 billion people on Earth. Everything we’ve done, everything we’ve achieved, all the stupid mistakes we’ve made, all of history, and all of life as we know it, happened on that tiny bit of dirt in the immensity of space.

It is hard to look at this picture and not feel conflicted. On the one hand, we have an overwhelming sense of isolation and insignificance. The universe is so big it contains absolutely everything there is. It is so bizarre we are only just beginning to understand how bizarre, much less comprehend its weirdness and explain it. And there we are, so small that if you dropped into the Cosmos randomly, the chances of being anywhere near enough to even notice the Earth exists are not far removed from infinity to one against. It is hard to accept that some god or gods created this enormity and then made Earth so utterly pointless.

On the other hand, the picture tells me we are utterly amazing creatures. The very fact that we can take this picture, or the Pale Blue Dot or any of the others, is an indication of just how bloody brilliant we are when we try.

If we are the only sentient beings in the universe, as Carl Sagan pointed out, then we have an enormous responsibility to get things right before we become extinct. If the universe has life other than us in it, then it must be so far away the chances of ever meeting it are next to none. If the universe is teeming with life, then what a magnificent opportunity to “join the club”.

It’s a shame, then, that we waste so much time on dumb things. Being sentient takes its toll. The fact that we can think makes us think we are enormously important. We are selfish, wanting to be important, successful and meaningful. We only have one shot at this, so we want it to work. Evolution has required us to be competitive, and we are, to the point of destroying others and ourselves. To the point of screwing up the little we have. People invent gods because they are frightened of oblivion and because they require meaning (even if most religions say we are incapable of understanding god’s plan anyway). We worship technology because it is a way of learning about the universe and also because it helps to provide the instant gratification our short, violent lives require. We fight among ourselves because the orthodoxies we embrace only make sense if others believe them too. We have to feel special, so we make sure everyone else suffers.

But then we go and take this picture, and suddenly it all gets put into perspective. We are both insignificant and mind-bogglingly amazing at the same time. For a little patch of over-emotional DNA, we haven’t done that badly. The more people come to appreciate a picture like this, the more hope there is that we come to terms with it.

Is destroying this beautiful blue little world worth being selfish? Is the brief glimmer of life you have worth wasting on triviality? I’m not asking everyone on Earth to achieve greatness. There isn’t room for that.

Religion is at it again.
This time, a church in England has stopped a grieving family from putting what they want on a relative’s gravestone. It seems Charles Clapham was a Rolling Stones fan (which means he had good taste in music, so he couldn’t have been all bad). But when they wanted to put “It was only rock and roll” on his gravestone the All Saint’s Church in Standon, England, decided that was not suitable for an epitaph.

Did they fear it was music of the devil? Is there a certain standard of subject matter that even the dead are supposed to conform to? Were they afraid visitors to the graveyard would be offended by a reference to Mick and Keith and Ronnie and Charlie? I can’t think of any other reasons they might have against it.
How dare the church forbid a grieving family’s wishes to farewell a relative in what they see as an appropriate manner. Sure, if they wanted to erect a giant statue of Mick Jagger over the man’s grave lit up in neon, or have “Sympathy for the Devil” pumping out night and day over loudspeakers, probably that would be a good call to ban it. But a few words written in what I suppose was to be a tasteful manner, as a dead man’s last tribute to a band that gave him untold joy during his life? I don’t think so.
This is particularly resonant with me because something a bit like it happened with my own father’s funeral back in 2007. Dad liked Louis Armstrong (again, proves his good taste in music) and we wanted to play some Satchmo at his funeral. But the Anglican Minister who was going to officiate at the ceremony refused to allow it because “rock and roll” (that’s what he called Armstrong’s music – I know, I know…) was not suitable for such a ritual. Besides, he said, he didn’t have a “ghetto blaster” (again, his words – shows how in-touch he is) to allow a “record” to be played.

Yes, this is 2007 we are talking about here. Playing records over ghetto blasters. This guy was really in touch with the modern world.
My mother was too upset about Dad’s death in the first place to argue. Besides, she had great emotional ties with this particular church in relation to her own parents. I was there and quietly seethed, not wanting to create a scene in front of my distressed mother. So we didn’t get Satchmo. We did manage to get “For those in peril on the sea” sung, which Dad would have enjoyed and which made a relevant reference to his love of boats. But that’s a hymn, so that’s all right. God’s mentioned in it. That must be the clincher.
How dare the church dictate ritual to this extent. What a family wants at a funeral is their affair. Of course, there are limits to this, but I’m sure the vast majority of people are aware of this and do not ask for outrageous, or racist, or obscene things. But modern music (or not so modern?) That’s a bit rich.
I’m not going to have a funeral. Not at a church. And not just because I’m an atheist. Funerals are more for the living left behind than the dead person. “She would have wanted it this way” doesn’t cut it with most funerals. I’m not going to have a church funeral because I don’t like their attitude, and since it’s been years since I stepped inside a church anyway, I’m not going to start after I’m dead.

We have some traffic tunnels under Brisbane that aren’t very popular. One of the big ones is called the M7, or the ‘Clem 7’ as it is popularly known, after an old, much-loved previous Lord Mayor of Brisbane, Clem Jones. www.clem7.com.au/
The company that runs the Clem 7 is going broke. It seems a lot of people don’t like paying the toll ($4.16) for a one-way, 6 minute trip. The thing is, it’s worth it, as you avoid heaps of  traffic lights, duck right under the central business district and save a lot of hassles.
But here’s the thing: recent events showed that Brisbane drivers hate paying tolls so much they would prefer to sit for hours in traffic instead of taking the easy way out and pay to use the tunnels.
Yesterday there was a very bad accident on the Story Bridge: a four vehicle collision, with one woman in a critical condition as a result. It’s easy to have an accident on the Story Bridge. It’s three lanes each way with only double painted lines to mark the change in direction. Putting up a barrier is apparently too expensive and would increase the congestion because it would reduce the lanes to two each way.

The Story Bridge is a popular bridge, and not just for traffic. It’s a Brisbane icon, part of the landscape. It features in one scene of my novel ‘Plato’s Cave‘ where being able to do a U-turn on the bridge is a vital plot point. Less creditably, it’s been the scene of a number of suicides over the years.
But getting back to my point. The accident yesterday caused major hold-ups for commuters. Traffic was delayed for four hours, with the gridlock extending for kilometres, involving many thousands of vehicles.
Now, the Clem 7 plunges under all of this chaos and provides a quick, non-congested way to avoid stuff like that. But, according to the Courier-Mail, only 3000 extra vehicles used it that morning.
Only 3000 motorists thought, ‘Stuff this, I’m taking the Clem!’
Am I missing something here? The many thousands of people who did not make that simple choice were delayed for up to four hours because they didn’t want to pay $4.16.
How many man hours of work were lost as a result? How many tempers flared? How many incidents of road rage, because people didn’t want to pay?
Now maybe I’m in a better position than some. I use the tunnels all the time, not just the Clem, but I can claim the toll as a tax deduction. A lot of people can’t, I guess. If you were a regular commuter to town, using the tunnels everyday would add up.
But I’m not talking about every day: I’m talking about one day when things were horrendously bad. On this really bad, congested day, only 3000 people decided to make things easier for themselves.
The Brisbane City Council has been trying for years to keep cars out of the central city area. They have boosted public transport, made parking fees in the city astronomical, and Brisbane’s complicated system of one way streets is no doubt designed to discourage the faint of heart. It’s even illegal to stop and drop off or pick up a passenger in the central city. So the Clem offers a way to avoid the city. If you are a city worker, you are encouraged to park in the suburbs and commute in on public transport.

Obviously, a lot of people still don’t. They would rather have their cars with them. They would prefer to pay the huge parking fees to have their vehicle nearby.
Recently I was leaving a client’s inner city apartment and had been able to park in their building’s basement for free. As I tried to leave I was almost prevented from doing so from the huge peak hour traffic congestion at the top of the car park’s exit ramp. It was thousands of vehicles refusing to use the tunnels and drive home above ground. 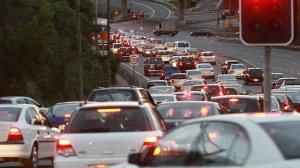 Why? To save a few dollars?
Brisbane’s traffic problem will not be solved until the drivers learn to use common sense.
–    Russell Proctor   http://www.russellproctor.com