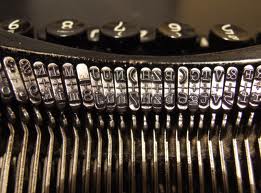 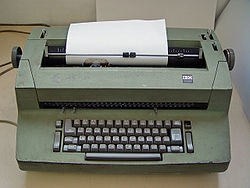 Remember them?
The other day I was teaching a class of year 7 kids and mentioned typewriters and I asked if any of them had ever used one. And a number of them didn’t even know what a typewriter was.

So I explained how there used to be these machines that you put the paper in and hit a key and a piece of metal would move and strike an inked ribbon and that would leave an impression on the paper, and if you wanted to have more than one copy you had to use this stuff called carbon paper. And it all sounded so complicated.

I love typewriters. I used to own three. I now have none. I feel sad about that.

They were noisy and slow (except the electric ones in the hands of an expert – but even they were noisy). The carbon paper left black smudges everywhere if you weren’t careful. The ribbon needed reversing after a while. You had to manually return the carriage at the end of each line.
But there were fun things about them as well. At the end of each line a bell went PING! to let you know were getting to the end and you had to push the carriage back. There was a solid feel to them. They were heavy and dependable. There were no font styles or sizes to worry about – there was only one of each. You didn’t have any cut/copy/paste options so you made sure what you wrote made sense the first time. They looked great sitting on the table. 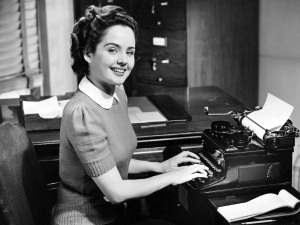 If you made a mistake, back in the really old days you simply typed xxxxxxx over the mistake and re-typed it. Later there were special typewriter erasers that never quite worked. And then, of course, White Out, which came both as a liquid that you slopped on like a paste or as a specially impregnated strip of paper that you re-typed the mistake onto. I like that idea – you were forced to relive your mistake, which helped you understand that you never supposed to do it again. The electric typewriters had special erasing ribbons, which seemed like the most amazing technology at the time. 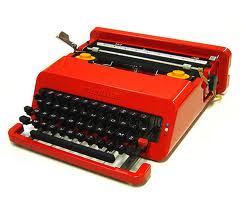 Word processors aren’t fun.
Word processors force you to think about all the things they can do. Fonts, captions, columns, dot points, spacing, even tracking changes and colour. With a typewriter, I could concentrate on what I said rather than how it looked.Composer Leroy Anderson wrote a short musical tribute, “The Typewriter”, which featured a typewriter as part of the orchestra. He had the right idea. Typewriters were amazing machines. The world has lost something great: a writing machine that was also a percussion instrument. How cool is that?

I learned to type the hard way. I used to work for the Queensland Department of Justice. I was employed in a Magistrates Court as a Depositions Clerk, which meant one of my duties was typing testimony in court as it happened. I didn’t use a short hand typewriter, just the ordinary sort, so I had to learn to type very quickly, and very quickly. The only special thing about the machine itself was that it was “noiseless”. It had a special construction that did, indeed, reduce the usual intrusive clatter of the keys to a sort of gentle burr. The downside of its construction was that it frequently jammed.
The lawyers usually did me the courtesy of slowing down their speed of delivery, especially while I madly scrambled trying to sort the keys out, but the witnesses didn’t always get the idea. I learned to type VERY quickly. Eventually, tape recorders were installed and my job became a lot easier, but the adrenalin produced by trying to furiously type what people were saying as they said it will never be forgotten. 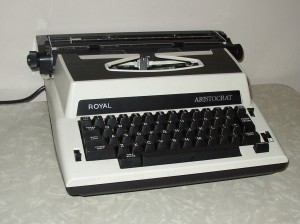 They have probably gone forever, but typewriters were indeed one of the great inventions of the world. Mark Twain, I believe, was the first writer to submit a typewritten manuscript to a publisher. That must have one been one of the turning pints of history.

I wish I still had one to take out occasionally and raise a noise on. The clack clack clackity clack of the old typewriter (an even the electric ones could be loud) is one of the defining noises of the twentieth century.

Kids these days just don’t get it. 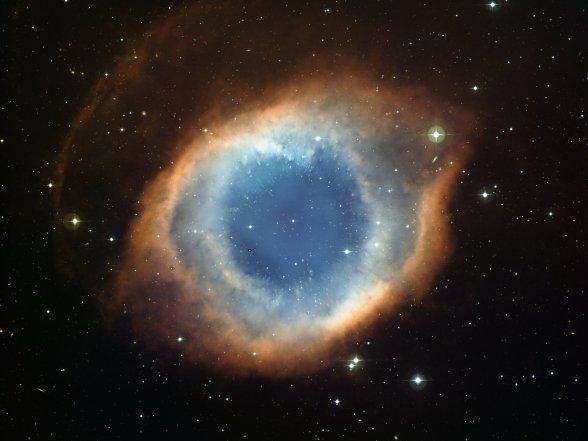 It would be so cool if God existed.

I mean a real God, not one of those crazy guys we have at the moment.

I mean an obvious god, one that reveals itself unambiguously to all. One that doesn’t need interpretation, or faith. One that gives us a holy book we can understand without going round in circles, and we don’t have to argue with others about what it means. One that rewards sensibly those who are genuinely good and punishes fairly those who are bad. One that doesn’t lay down a moral code that denies unselfish pleasure. One that is tolerant of all, even those who don’t wish to believe in it. One that is beyond gender or race or sexual orientation.

That would be so cool.

Wouldn’t it be great of God was a law, like gravity? Have you noticed that gravity exists even if you don’t believe in it? Gravity works everywhere, all the time, not just only with certain people who want to believe in it or surrender to it. We can’t help but surrender to gravity. If God was like that, we wouldn’t have to fight wars over how we believe in it.

But we don’t get that. All we get is a washed-out god, one that reflects the fears and jealousies and hopes and dreams and selfishness of human beings. We get a god that looks so lame, that is almost powerless, that can’t even get the universe right or design a sentient creature that doesn’t run a fairly good risk of destroying itself. Noah’s Ark? We don’t need a god to punish us for our sins, we are doing a great job all by ourselves.

We get a god that doesn’t accept its own creation, that has to fit science into the cracks in the faith it is supposed to have in itself, like a sort of apology.

I’d love to be able to pray and zap! – what I prayed for happens. No problem – just suspend the laws of physics for my own benefit. It would be awesome if miracles actually happened without the need to test whether they really are miracles or just that damned science getting in the way again. If I lost a limb I could just ask for another one, a real one, as good as before. What if Muhammad really had split the moon? No problem: he fixed it up again, but it would have been so amazing to see that.

It would be fantastic if that face I think I see on my slice of toast or in that tree bark or in the clouds really is the Lord. How wonderful it would be to know that god is there, watching me always, caring for me. Really, really concerned for my welfare. Not just some other person telling me that’s what god is doing.

The god we have at the moment – the gods we have – are such a disappointment. They’re so…well, just so human. Like they were invented by people. That’s a shame.

If God existed, it would be something really, really, cool. And I’d love to meet it.

Until that happens, I guess we’re stuck with our imaginings.