Readers of high fantasy have their expectations. The story is supposed to be set in an invented – usually magic-using – world, and writers of it are expected to adhere to certain tropes. Elves, dwarves, wizards, some supernaturally powerful bad guy, dragons, magical creatures and often a protagonist who is someone special or powerful. Usually the world is so complicated and “real” for the purposes of the tale that a map is included to help the reader visualise places and background information. Some writers include glossaries and appendices to “flesh out” things without having to break the narrative with great wads of information within the text. They will have invented languages and characters with “fantasy” names  like Rand al’Thor or Boromir or Arya. 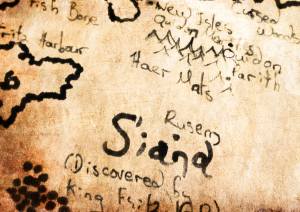 And then there is Y. K. Willemse’s high fantasy series The Fledgling Account.

Willemse has done things a bit differently. She has an invented world, the Mio Pilamúr. She has a map, although it doesn’t appear in the books. She has an invented language, too. But she also has what I venture to say are radical departures from the genre. Her characters (some of them at least) use firearms as well as swords. Some have fantasy names, others are called Robert and Roger and Elizabeth. She has the supernaturally powerful bad guy, known as the Lashki Mirah, who differs from most fantasy villains by having no real agenda – he’s a total psychopath. He wouldn’t mind taking over the world (hey, don’t we all?), but he enjoys killing people anyway just because it’s fun.

All of these are good things. 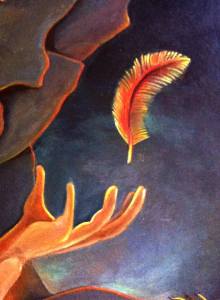 The Fledgling Account is to be a seven book series. Two are out at the moment: Rafen and The Sianian Wolf. Coming this month is Servant of the King, and that will be followed by The Fourth Runi.

There is a lot to like in the series. I like the fact that fights take place using guns. I like that fact that there are no elves or dwarfs or hobbits or any of those other “required” races in high fantasy. I even like the fact there is no world map of the Mio Pilamúr* in the books: Willemse does have one she drew up and I have seen a copy of it in an email. But it’s not in the books and that’s a good thing. It means I can imagine what her world is like, I am involved in the creation process.

I also like the fact that so far Willemse has managed to avoid the two major plot lines of high fantasy: the War and the Quest (or both). The Quest is a major theme of high fantasy: the plucky hero goes off to save the world either by finding some desperately powerful McGuffin or getting rid of it. The War theme is exactly what it says. Often there is a War going on while a Quest is being fulfilled.

I don’t know whether there is a War planned for the series – there’s definitely an excuse for one, and it wouldn’t surprise me if it does come in due course. But what Willemse had produced in the first two books is a Bildungsroman. And if you don’t know what that is, it’s a literary genre (by no means restricted to high fantasy but sometimes forming part of  it) that focuses on the protagonist’s  psychological and moral growth from youth to adulthood.

Willemse’s protagonist, Rafen, starts out as a boy at the beginning of the series, a slave in a coal mine, and over the course of the series develops as a character, makes mistakes, rebels, loves, hates, triumphs, falls again, and ultimately (we hope) wins out over the bad guy. In other words, this series is about the main character growing up. The fact that he is fighting elemental forces of evil is a nice addition on which to hang the story of Rafen’s life. But ultimately the series is about Rafen’s clash with evil rather than the clash of good and evil in the first place.

And this is what makes Willemse’s saga such a refreshing thing. The main focus of the series is a character. Not a magic ring or a map or an invented world or some fantasy creature like an elf (be honest,  how many actual elves do you know in real life?), but a raw, vulnerable, fallible human being. So far, Willemse hasn’t let the Mio Pilamúr and all that it contains overshadow the main point of the story: Rafen himself.

I guess that’s why the first book is called Rafen. Makes sense. In fact, when you think about it, all of the four (known) book titles refer to Rafen. Even the series title – The Fledgling Account – refers to him.

I’m not saying high fantasy is jaded or tired or overdone. But it’s nice to find someone willing to take it on and show the world that there is another way of doing it. It’s a brave move and, I hope, a successful one.

According to the Concise Oxford Dictionary, a cliché is (a) a hackneyed phrase or opinion or (b) a very predictable or unoriginal thing or person. I used to have a dictionary of clichés, I think also published by Oxford. The precise purpose of such a reference source eluded me. Perhaps it was so people could check they were not using clichés in their writing or speech.

Because, of course, we must avoid using clichés. In this post I’m not so much concerned with the first definition above. We all recognise these things for what they are pretty quickly:

Not in a million years…

For all intents and purposes…

As heavy as lead…

Millions of these things are espoused daily and eliminating them isn’t too hard with a careful edit. But today I want to discuss the other definition, which is far more insidious in writing and film. The situational cliché. The story that goes along predictable lines and ends the same way lots of other stories have in the past.

There are lots of these too. I mentioned one years ago when I reviewed a film, Hansel and Gretel. There it was what I called the “too cool to look” hero walk. You know the one. The hero has just beaten the bad guy and lit the fuse for an explosion. As the bomb detonates in the background the hero is seen walking towards the camera, dead-pan expression on his face or maybe lighting a cigarette, not bothering to glance over his shoulder as the explosion blows the final shreds of the villain away. It’s meant to show that the hero is ultra-cool, so cool in fact he can ignore an event that would have everyone else ducking for cover or at least turning around to look at*. So cool he doesn’t need to run.

It’s been done a lot. It’s a cliché. It’s the sort of thing writers need to avoid.

I myself had a recent problem with a cliché ending to a series I’m writing at the moment. My cliché was “the hero sacrifices herself to save the world but isn’t really dead and comes back when everyone least expects it and manages to destroy the bad guy…” I wanted to avoid it and it took a while to do so.

The Star Trek film franchise did this a lot. In The Wrath of Khan Spock is killed. He’s back in the next movie, not really being dead at all of course…well, sort of but not really. Even the Enterprise has been destroyed a number of times but there is always a new one just being completed the crew can transfer to. Handy, that.

There are book series out there that have cliché endings. Lots of them. The Harry Potter series for instance. Harry gets killed and brought back to life because he’s not really dead…well, he is, but not really. In his book Destiny Unfulfilled: A Critique of the Harry Potter Series, Jim Adam states that J. K. Rowling uses the cliché of the Christ-like sacrifice to save mankind (or in her case Wizard-kind). The hero needs to die, to sacrifice his or her own life, in order to save the lives of others.

That’s been done too.

I’m not saying there’s anything wrong with the Christ-like sacrifice, except that it’s been done. A lot.

And this was the problem I had. It took a while to solve it, required me to consult with my editor, and is going to necessitate a heavy re-write of the last part of my final book in the series, but at least I am happier with the ending.

Cliché is an easy trap to fall into. Movies, especially the plethora of prequels and sequels they engender, are full of them. Books, too. A good writer should be careful to spot them as they arise and deal with them before it’s too late.

Damn! Before it’s too late… A cliché!