If you’ve never been to Brisbane, Australia, you’ve never met the City Cats. It’s not a football team or a group of exotic dancers – although that might be fun. They are the City Council ferries that ply up and down the river: large, powerful catamaran passenger vessels. They are a great way to see the river. Although they aren’t the fastest way to travel in Brisbane, they are certainly the most scenic. You can go all the way from Brett’s Wharf where the big ocean liners dock to the Queensland University, passing through the city and Southbank on the way. Well worth the few dollars it costs. 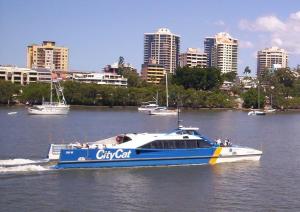 I took one yesterday to go into the city for coffee with a friend. She and I have these coffee meetings every so often that usually turn into lunch and we discuss writing, life, the world at large and the cosmos in general. We come to some fairly amazing conclusions and have pretty much got it all figured out. We’re just not telling.

It being a nice day, I decided to take a Cat into town.

I love the Cats. You can sit and watch a world that you can’t see from the road. A lot of houses on the river have their own boat jetties from the backyard down to the water. You surge under bridges, which look a lot different from underneath than they do from above. The cliffs near the Story Bridge are quite a sight, with houses perched precariously on top of a twenty or thirty metre vertical rock-face down to the water. When you get into the city itself, the high-rise apartments are quite impressive, too. Maybe not the tallest buildings compared to other cities, but they do for us.

What I especially noticed yesterday was the amount of debris in the water, still floating downstream from the floods last week following Ex-tropical Cyclone Oswald. Lots and lots of branches, logs, sticks and other natural flotsam. But there were other things as well. 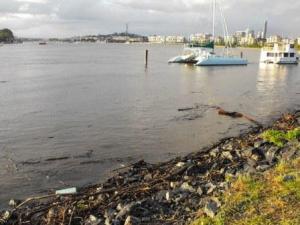 At one stop I noticed someone’s hat floating in the water. I wondered what happened to the rest of him. There was a large sheet of polystyrene too, plastic bottles, a tin can that somehow was still floating upright. Other garbage. Not at all what our lovely river usually looks like.

The drivers of the City Cats had to take care not to hit this stuff. The ferries get up quite a speed on the long stretches and some of the logs would have caused considerable damage had we hit them.

So I just want to apologise if you are a tourist to my town and think it’s like this all the time. It isn’t, we just had a whole lot of water through lately and things are still a bit untidy.

We’ll be back earning our title of The River City soon enough. Come and “catch a Cat” and see for yourself.