Some writers plot. Some don’t. I sort of do it. I don’t sit down and carefully write out everything that’s going to happen in my books. If I did, I would no longer be interested in writing them. I sort of have an outline, or at least a vague idea of what I think might happen, and go from there.

After that, I start writing along the lines of what I had in mind for that chapter, and make it up as I go. I discover new things as I write, develop new ideas for the characters, and sometimes things go in a very different way to what I had intended.

Take today for instance. I was writing a scene in my new book (I hate the word ‘Chapter’. I don’t regard the divisions within my books as chapters, although they are, mostly. I call them scenes. My background as an actor coming back to haunt me, I guess). Anyway, I was writing a scene and half way through I had an idea that changed the direction of the entire book. That’s ok. I think the new direction is a superior one. The scene didn’t end at all the way I had planned. But that’s writing.

Such irresponsible activity usually means that I have to reconsider other chapters, particularly what has gone before, and re-write them to conform to the new stuff.

Occasionally, I do plot something out in detail. Below are some notes I made for several scenes in my novel ‘An Unkindness of Ravens’ which detailed two sets of characters doing two things separately from each other. Most of the ideas on these pages ended up being scrapped anyway. But this level of detail in my pre-planning is rare. 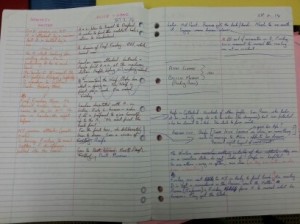 Usually it’s more general ideas, most of which I won’t use eventually. This makes my writing more dynamic, and to me more interesting.

Some writing teachers abhor plotting. Some encourage it. One, namely James Scott Bell, suggests you try a combination of both, or neither. It’s up to the writer. I am kind of the school that goes with, ‘Well, if I know what’s going to happen, I don’t feel inclined to write it anymore.’ On the other hand, ‘winging it’ from start to finish has a lot of dangers, too. The only writer I knew who could wing it entirely and get away with it was Roger Zelazny, who is one of my influences and one of the best dialogue writers I ever had the pleasure of reading.

I guess writers do whatever it takes to produce the goods. I start and stop, do research when I discover I need to, write the ending sometimes very early on so I know where I’m going, think up characters and then try to justify why they are in the story, realise they aren’t, get rid of them and bring them back later when some justification for their existence comes to mind.

Writing is dynamic, and pre-plotting sometimes gets in the way of a good tale. So I do a bit of both. I think it works.