It’s a great scene in the movie Alien. Ellen Ripley is the last surviving member of the crew of the mining ship Nostromo, who have been wiped out by a marauding alien monster. In a desperate bid to reach the lifeboat before the self-destruct timer reaches zero, she grabs a flamethrower, rolls up her sleeves and does a great Sylvester Stallone impression as she fights the evil critter and avoids becoming dessert. 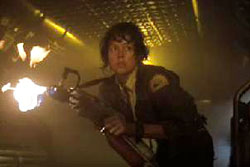 In fact, she’s acting just like a man would in the same situation. Later, of course, there is the even more famous scene where she strips down to her underwear and still manages to defeat the alien (admittedly by clambering into a space suit first, but we all knew she was still in her undies inside it). What a woman! Not only can she defeat a giant killer xenomorph, but she can do it in her cotton socks!

There are countless examples of this trope in cinema and books. I call them “male fantasy” action heroines because basically they are designed to appeal to the following things male viewers/readers like to see in such a character:

(a) knowledge of how to use weapons, mainly ones that go “bang” and fire endless rounds of ammunition without the inconvenience of needing reloading;

(c) the propensity to swear, drink and/or spit, combined with an ability to level an opponent with one punch or with a well-placed high kick while suspended in mid-air (I’m looking at you, Trinity). Preferably all of these at the same time.

I’ve never met a woman like that in my life. I’m not saying I wouldn’t like to, but I never have. Maybe I don’t get out enough.

It’s hard writing the opposite sex, particularly from that character’s POV. There have been some howling errors in the past, and some authors have eschewed writing opposite gender characters at all in order to avoid the issue. Even the greats have faced this problem. Isaac Asimov, for instance. I doubt many readers would say he wasn’t a certified genius in the science-fiction field. He was even a feminist. But his list of strong, story-important female characters is terrifyingly small.

Now of course, it’s easy to say that male dominated science-fiction and fantasy books at the time Asimov was writing were the norm. Even Tolkien had few female characters. It was also true of other genres where action scenes were expected, like James Bond. Of course women weren’t seen in those times as action heroes or even necessarily important for a story other than as “peril monkeys” that needed rescuing by the athletic male lead.

But times have changed. Unfortunately, it means that a lot of writers now think women have to be just like men in order to be taken seriously. Unfortunately, I think a lot of women writers think the same thing.

So, what do we do? Well, what I do with my stories is have strong female protagonists who act like women. All my books so far have featured female leads. The guys are there, and taking major roles, but the lead protagonist role is female. And I’m a guy. So writing from a female POV is tough. (Especially in my book Plato’s Cave, in which I write as a female in first person POV. My mother didn’t understand it at all.) But what I’m not trying to do by this practice is have female characters that act and sound like men. Women have better things to do with their time than be just like guys.

And they can be far more effective as characters  by not doing so.

Sure, it’s tough. When I was a teenager and writing lots of books (none of which saw the light of day of course) all of my female characters acted like teenage boys. Fair enough, I was a teenage boy myself at the time and didn’t really have enough writing skill to create more realistic characters. But the trick is to avoid that mistake now.

So female writers should try to write strong male parts. Male writers should try to write strong female parts. Just don’t make them reflections of how you want them to be. Make them how they are. And if that means getting a second opinion and maybe doing some research, then that’s what it takes. But don’t shy away from the idea.

So, for what it’s worth, here are my tips for writing strong female leads (especially if you are a guy):

1) Get a woman to read what you’ve written. Someone you can trust to give constructive feedback. Ask her if the character behaves as she (the reader) expected.

2) Before a female character does something, stop and think. Is this cliché? Would a guy do this? But be careful to avoid going too far the other way. A female character who makes sure her lipstick is right and checks her hair before going into battle is going to get you just as many howls from your readers as making her too “butch”. Maybe even more so.

3) Is there some way the character can solve a problem without resorting to immediate violence? Can she think or talk her way out of the situation? What are her priorities? Immediate personal survival? Protecting others? She might be able to side-step around the issue and approach the problem from a different angle.

4) Show the reader how the character is feeling as much as what she is doing. Women tend (please, don’t get mad – I send tend) to focus more on emotional response and be more aware of their emotions than guys. If you can’t emote with your characters and show the reader how they are feeling at any given point there are two problems: (a) you aren’t used to expressing your own emotions in the real world; or (b) you’re an emotionless robot.

Female action heroines can be girls as well. Give them the chance to do so. I love Sigourney Weaver’s portrayal of Ellen Ripley. I really do. But the story could just as well  have been about Edward Ripley without any change to the plot*.

* I do admit that in the later movies of the Alien franchise, and Alien3, Ripley does act more nurturing and caring.